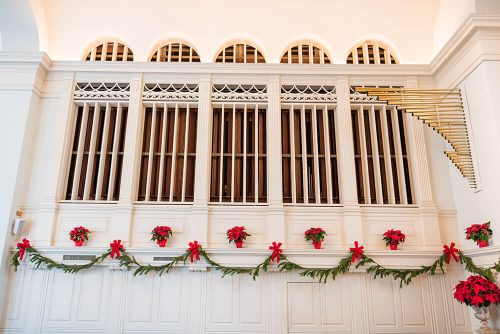 M. P. Moeller, Inc. designed the pipe organ in the early 1950’s for $30,450. It was one of the premier instruments in the city and was often chosen to showcase artists in recital. In the early years, Richard Ross and Robert Elmore were invited to play. After Bruce R. Eicher was hired as Director of Music, he instituted a new Concert Series, and visiting artists included E. Power Biggs, 1959; Virgil Fox and John Weaver, 1960; Virgil Fox and Catharine Crozier, 1961; Simon Preston, Mme. Marie-Madeleine Duruflé Chevalier and Maurice Duruflé, 1969. The Duruflés returned again in 1971.

The Music Committee began an organ fund upon receipt of a designated bequest from the estate of John W. Sherwood. The first additions to the organ were made in 1969. According to an issue of “Organ Happenings” in 1975, Bruce Eicher and the Moeller organ builders were developing a master plan for enhancing and enlarging the organ, dividing the work into stages. The Administrative Board approved the fund that year. Phase I was done in 1960 – $5,100; Phase II work – $11,500. Phase III was installation of the trompette en chamade for $8,000 in 1978. In 1978 a Moeller representative and Mr. Eicher gave an organ demonstration with slides, lecture and performance, and in 1979 the 120-voice Baltimore Choral Arts Society with Mr. Eicher at the organ presented a concert to benefit the Organ Improvement Fund. A tour of the Moeller factory was planned, donor names were entered in a special book and names of larger donors included on a plaque. Phase IV was made possible with the addition of two major gifts, so for just under $90,000 we could install, do tonal revision and revoice the finished 3671 pipes. The organ was now 41 ranks, 40 stops with a replacement value of $229,300. The instrument was dedicated on May 3 at 11:00 and a dedicatory recital given that afternoon. In 1981 the zimblestern was added in time for the Christmas Eve services.

During the discussions of the merger of Wilson Memorial Methodist with Grace, the value of the Wilson instrument at $50,000 when added to the organ fund amounted to $80,000 so a new console was considered for Grace when the Chancel was redesigned and the Sanctuary redecorated. After much investigation and personal visitations to other sites and installations, a custom instrument by Robert Turner, Hacienda Heights, CA, was ordered – five manuals controlling 150 stops, 61 ranks of M. P. Moeller pipes and 60 digital ranks by the Robert Carpenter Co. “A Farewell to the Old Console” concert was performed in May 1998, with invitations sent to all organists who had ever played it. 20 of the 34 were present and played! That organ had served us well for 48 years!

The new console was delivered in May to be installed over the coming months in its new location on the south side, with an elevator lift, as the new chancel took shape. It was dedicated on December 6, 1998 in a program featuring the combined choirs of Grace and Beth El Congregation (70 singers), the Quartet, Cantor Thom King, David Brock and Bruce Eicher. A number of international artists were invited to play in the coming years: Simon Preston, 1999; Joyce Jones, 2001; Elmo Cosentini, 2002 and 2009; Felix Hell, 2003; and Alan Morrison, 2004. In 1999, the annual French Organ Marathon, five hours of music from the great French organ repertoire performed in mini-recital segments by 15 artists, was begun. In recent years, the length of the event and number of artists has decreased some, but this year the marathon celebrated its 20th season.

In 2019, the Church Trustees approved a renovation project on the organ that was completed in October 2021.  Dan Angerstein at Angerstein Organ Works, Inc. in Hendersonville, NC has worked the last two years on completing this project. The entire organ has been tonally refinished to provide solid, warm choruses with good balances and colors. All of the reed stops have been cleaned, repaired and revoiced for greater warmth and stability. New slide tuners have been installed on all flue pipes. All chestwork and chambers have been vacuumed and cleaned with new lighting installed in the chambers. We are grateful to the Trustees of Grace Church for supporting this much-needed work. A re-dedication organ recital will be given by Jacobs School of Music, Indiana University Professor Emeritus Dr. Marilyn Keiser on Friday, March 18, 2022 at 7:30 p.m.