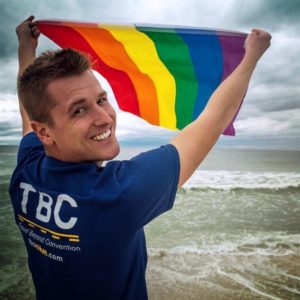 in the Fellowship Hall at Grace Church

Not only is he speaking and singing, but as a gay man who loves the outdoors, Meyer’s goal is to also raise awareness of lesbian, gay, bisexual, and transgender issues and break a stereotype that a gay man can’t also be an outdoorsman. “There’s never been an openly LGBT person sponsored by the entire outdoors industry and there’s never been an openly gay man in any single (outdoors industry) ad,” Meyer said.  “And so there’s this stereotype that the outdoors is not for gay men — that gay men would rather be on the beach or at the bar.” Meyer, 32, is a countertenor — the highest adult male singing voice — who spent four years in the Washington National Cathedral choirs. He left Washington, D.C., where he last lived, to start his cross-country trip on April 29, 2016, the 11th anniversary of his father’s death. The trip is dedicated to his father, Larry Meyer, a Lutheran minister, who died from esophageal cancer when he was 58 and Mikah was 19. Mikah grew up in Lincoln, Nebraska, where his father was a campus pastor at the University of Nebraska. The elder Meyer didn’t visit a lot of national parks but was a fan of road trips. So Mikah’s parents took him and his three older sisters on lots of car trips as they were growing up. To honor his father, Meyer’s done one road trip every year since age 19. And on those trips, he found the national parks he visited were some of the most amazing places he’d ever seen.

But as people started to learn why he was doing the trip — not only to honor his father, but to create a new role model for the LGBT community and break stereotypes — he received more positive messages. A large part of Meyer’s journey has been sharing his story of being an openly gay Christian and a pastor’s son. His aim is to help people, who like himself, grew up thinking they couldn’t keep their faith and come out of the closet. “To show them an example of someone who lives both of those identities proudly,” he said.

You can check out a previous performance HERE, but we guarantee it will be better live!